To say the back end of Facebook is a labyrinth of special features and untapped potential is an understatement. While any business advertising on Facebook can get by perfectly fine with the basics, we’re strong believers in taking the time to learn more about its less known features. It’s a little bit of extra effort that results in big long term gains. We delve into three of these advanced features below, explaining how they can help optimise your campaigns.

Lifetime Value Audiences (LTV) provide an opportunity to re-target those who have historically had a high value (for example, repeatedly having a high average order value, or purchasing regularly) and then create lookalike audiences from these original users.

The way to create LTV audiences is to either manually build a high value audience over a select period of time, or use a third-party provider to sort through these customers from your database.

Facebook Audience Insights is a new tool designed to help us learn more about target audiences, including aggregate information about demographics, geographic location, purchase behavior and more. See examples below: 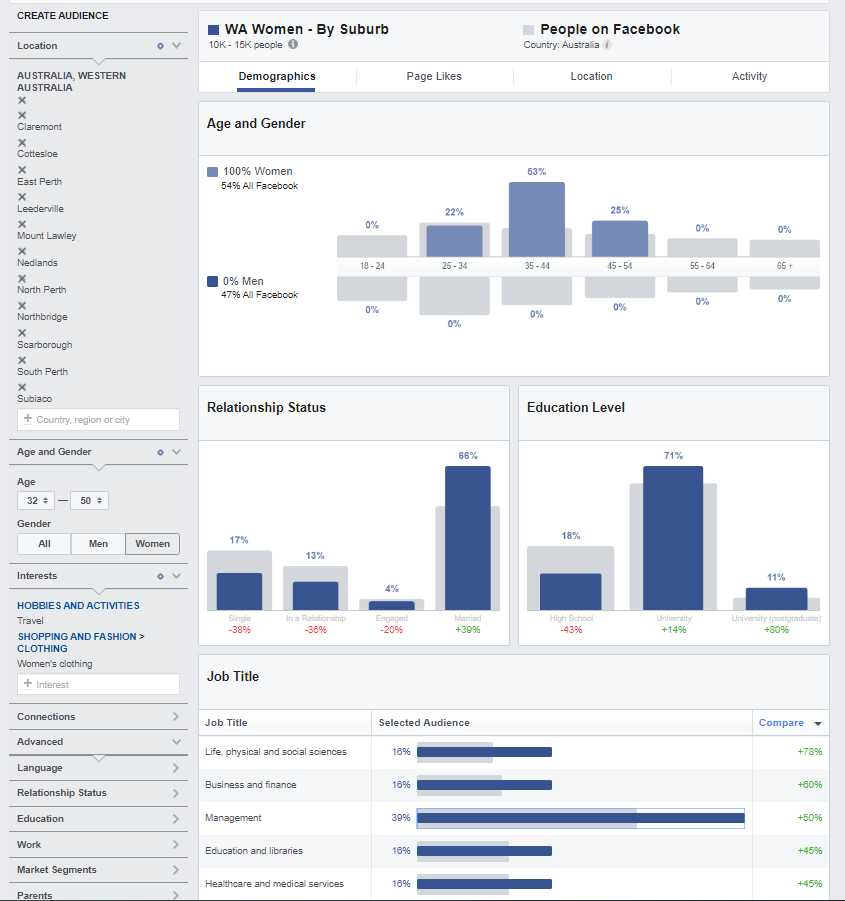 How is audience insights useful to you? Let’s say you want to raise awareness for your brand, and you only sell your products in-store. Surely you are interested in knowing an estimate of the people living near your stores, as well as their interests, their purchase behavior and their shopping preferences (online vs. in-store). Using the Audience Insights, you can get really useful data such as:

And you can view this information for three different groups of people:

Then go to the upper left corner and click the three lines button, scroll down until you see “Audience Insights”.

The purpose of relevance scores and ad relevance diagnostics is to help advertisers identify if their ads are relevant and resonate with their audiences. Until recently, relevance scores were assigned to each post, in a somewhat opaque process, which were then used to compare posts to one another. Recently, Facebook replaced Relevance Scores with Ad Relevance Diagnostics, a more granular way of measuring an ad’s relevance, measuring performance across three dimensions: quality ranking, engagement rate ranking and conversion rate ranking.

Quality Ranking
A Quality Ranking reflects an ad’s perceived quality in comparison to ads that are competing for the same audience.

One thing to note: relevance diagnostics are only available once an ad has a minimum of 500 impressions, which ensures accuracy.

You can find more tips on Budget optimisation here and more about Facebook Metrics here.

Hope you enjoyed this blog, and if you have any questions about these features or any topics you want explored, drop a comment below or give us a yell on Twitter, Facebook or Linkedin.